first entry! excited to start this blog although it will be a whole lot of nothing. A lot of talking, but not really saying anything.

today i went to the wholefoods garden and helped a friend plant a bit. after that we walked around for a while until her mom came and picked us up, because we both only have our learners permits. soon we will drive everywhere with reckless abandon, like, speeding and stuff. or we might just obey the rules of the road also, thats cool too.

i went home and did absolutely nothing. i played guitar [i am really very bad at it] and listened to mitski [bury me at makeout creek]. my mom took me to the lake and i had a good time there. we just walked around in the dark and talked, then we drove home. a pretty good day, i think.

today was definitely a day

it was pretty good in all honesty, i got a haircut after it had been put off for a week and i really love it. my mom did a good job on it. i messed around with some friends and coded my main website a bit more [bit of a scavenger hunt going on, its got layers].

i ironed a bunch of shirts because im going back to school soon and i need to learn how to do these things because all of my clothes wrinkles like an insane amount. for some reason. im excited to go back to school but i am also really very incredibly nervous. ill be fine because im sexy though dont worry

august 8th i dont know what time it is

im planning a vampire party with my friend [dress up as vampires and watch 10 hours worth of twilight party] and im looking forward to that. other than that today was really slow. i woke up at 6 am unprompted, probably because of the night before. little to no sleep is always a great time [this is sarcasm].

im starting to draw again, like really draw, how i used to. not just doodles and im trying to finish an idea thats been in my head for a while. burnout hit me really hard, it always does. but im crawling out of it "like a hero" [i wonder if the person who said that is reading this, hey wife] and im doing an okay job at it, i think

started the day off by more planning of the vampire party [mentioned above] by dressing up and doing makeup. did some pretty killer vamp makeup and decided what attire id be wearing and i think i looked wicked. i cannnot wait until halloween if u couldnt tell

next i went to guitar center with my dad and poked around until i saw an abbey road record [score] and i bought it [although it was a 2019 anniversary mix which is kinda lame, it still sounds good though] and i went home and listened to it like 4 times in a row back to back. this sounds really incredibly stupid but i forgot how much i liked the beatles [shoot me]. like abbey road and sgt pepper on vinyl is a dream i am so thankful and i am so glad i have those

i worked on my website a bit more today after not doing anything for a day. i really like coding i just dont have the ideas [or effort to execute the little ideas i do have] so whenever i want to code i just go and play minecraft instead. been playing minecraft alot lately

looks like i missed about five days! whoops! well then

just got back from a friends house [first time spending the night in over two years] where we binge watched twilight for 13 hours straight. it was a really really good time, and im so glad i got to spend time with my friend again. we got to catch up, like in depth catch up finally which was a good thing. we walked around the neighborhood and to the front of the neighborhood and talked for aaaggeeessss. when we got home [around 1 am] we started gossipping, you know, as you do, but for some reason in british accents???? we did british accents for two hours straight gossipping???????

the movies themselves were okay i guess. the best part about the movies by far were alice cullen, my beloved 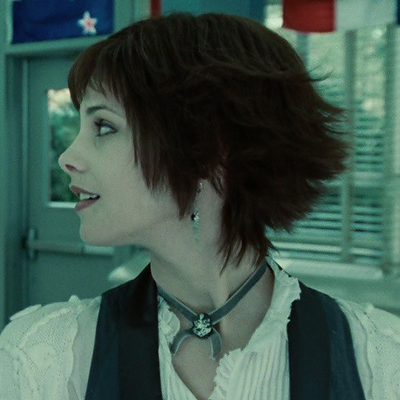 i literally love her so much

i want to be her and be with her at the same time like seriously who could resist her. gosh. wow. okay ill stop now

everything else that happened was a blur, its been a good few days. i got a cape. i got my bass back. starting to REALLY feel like myself again. im listening to the brobecks right now, which me from about a year ago would be screaming and crying [in a good way] over. school is starting and im excited and nervous and hating it and loving it all at once. its gonna be good and fine. im gonna be good.

the past 5 days have been a blur honestly. i go to school in two [technically 3] days, going to the lake with a friend tomorrow. im listening to I Hate Myself & Want To Die by Nirvana rn bc that song absolutely bops. talking w another friend about badflower [a band i have yet to get into] and weve gotten really close recently and im glad. hello bff :) i wonder if youre reading this :)

nirvana is really very incredibly good when i feel like evertything sucks, because when i listen to nirvana everything still sucks ive just got an absolutely killer playlist to go along with it. i need to be a specific type of pissed off for such effect to work though. gotta love it

just got back from the lake like 30 minutes ago, it was really fun and i learned that i am a master marshmallow roaster which is cool as hell. you need ur mallows toasted? u came to the right guy. listened to alot alot of car seat headrest today, madlo before 9 am and then teens of style while i was at the lake. maud gone always gets me feeling some sort of way. thats my song and nobody can convince me otherwise. other than that i listened to this absolutely HORRID cover of lovesong by the cure, it was from an adam sandler movie and they tried to make it tropical and the person i was with and i just lost our entire minds in the subway parking lot.

was really out of it most of today which is not favorable but it happens. teens of style helped.

lame part about school after tomorrow: going to bed super fuckin early. im not gonna say im a morning person because im not, but im not opposed to waking up earlier than noon. if i could wake up at 5:05 every morning and go to bed at 4 am and have enough energy to get thru the goddamn day then you bet your ass i would. but unfortunately thats not how it works, or whatever. its lame as hell! i like sleeping, its not like i hate the fact that i have to sleep sometimes, i just wish it didnt have to be like 8 hours. i used to survive on 4-5 hours [3 when i was desperate] of sleep but i guess it doesnt count because i felt like shit. i wasnt really doing well during that period of time. im sleeping better now, i just wish i didnt have to for as long!!!

school started! ive been having a suspiciously good time actually. ive met a few new people and im really glad i have. ive been talking to one of them specifically alot lately, and like, we barely ever talked last year and i am so mad at myself because we totally should have talked more. i wonder if hes reading this. hey :) anyways,the only real downside to school right now is the actual work and then how tired ive gotten. i just havent had the energy to do much other than my homework after school, that sucks! but it only makes the weekends that much more enjoyable, so theres that.

listening to Je te laisserai des mots, a song that makes me feel really stupid with alot of emotions all the time. its a good one! french is a beautiful language really. i think i could talk about this song forever. the violins swell in such a way that makes my head want to explode, with the perfect piano and quiet vocals to pull it all together again. i would try to cover it if i had the balls, which i dont. i might figure something out. who knows.

very eventful weekend, very good weekend, and i am doing really very well :) i'm on the phone with the person i previously mentioned before, who is super cool and fun and nice and he better accept this compliment or a swear to all things good and holy

i'm trying to do a charcoal study for art class but i cannot find a good thing to study. ive gone all around my house trying to find something interesting but nothing is of interest to me. i tried taking a picture of the money tree downstairs but i couldnt get the values to show up right. im getting only a little bit frustrated with it, but i'll be fine. i also updated my main website today which is rad as hell. im having a good time :) a really good time :)